This is another Einkorn experiment. Somehow I keep being fascinated by this grain. I like its taste and maybe its difficulty as well. What I especially like is that it is organically grown, very nearby. Instead of going for a whole different approach, like I did before, I just wanted to know what would happen if I try make a bread (almost) the same way as I bake my Imsil loaves. In what ways does it respond differently than wheat? In which steps is that most notable? Does it respond similar to rye?

Instead of just giving the recipe, I will start by a short summary of the things I noted while making the bread.
I started by making a 60% hydration sourdough starter (made by adding 10% rye sourdough). This starter is quite like a 60% hydration whole grain wheat sourdough starter, it feels a little more wet and certainly more sticky. Not as sticky as rye sourdough however. I let it ferment for some 10 hours at room temperature, which went very well. Next I mixed the einkorn with water for an autolysis of 30 mins. Again, this feels quite like a whole grain wheat autolyse with identical hydration. Yet, unlike a whole grain wheat autolyse, not much didn’t seem to have changed in the einkorn dough after 30 mins. Then I added the salt and sourdough and kneaded the dough (by hand). Yet, the strange this is that Einkorn doesn’t really seem to care about kneading. Kneading the dough (70% hydration) felt more difficult than kneading a similarly hydrated wheat dough. It’s not resisting the kneading the way wheat does, instead it feels like kneading clay. A rather useless but exhausting exercise. Actually very much like whole grain rye, but less sticky. I let the dough ferment for 2,5hr (at room temp) with three stretch and folds. I found out that stretching and folding is completely useless, in fact, it’s impossible. It’s more like tear and stick. The dough really doesn’t stretch. Nothing, it just tears. The funny things is that the structure of the dough didn’t seem to change over a time span of 2,5 hours (except for getting aerated). After the bulk fermentation I tried to shape the lump of dough, but it’s so sticky that it’s pretty impossible. I tried to do some basic shaping but it just tears. Nothing like 100% whole grain wheat but also not exactly like a 100% whole grain rye. I put the dough in a pan and let it ferment for another 3 hours. The volume increased about 2.5 times and I baked it in a 220 pre-heated oven, lowered the temperature to 200 and baked for 40 mins. The result was quite a surprise, although the structure isn’t perfect, it is very well possible to cut thin slices of bread and it tastes very very good! As a matter of fact, after cooling the bread, my flatmates managed to finish the whole bread in a few hours! Because I wanted to know the effect of overnight fermentation I repeated the experiment with a overnight final fermentation in the fridge, instead of 3 hour at room temperature. Also, the second time I used a different oven. Overnight fermentation didn’t seem to improve the quality significantly.

Because I usually keep only a single sourdough culture (made of 100% rye), I always end up with a tiny bit of rye in my bread. If your sourdough culture is made of einkorn/wheat/spelt, you obviously do not have to add 6gr rye to the dough.

Making the final dough and baking 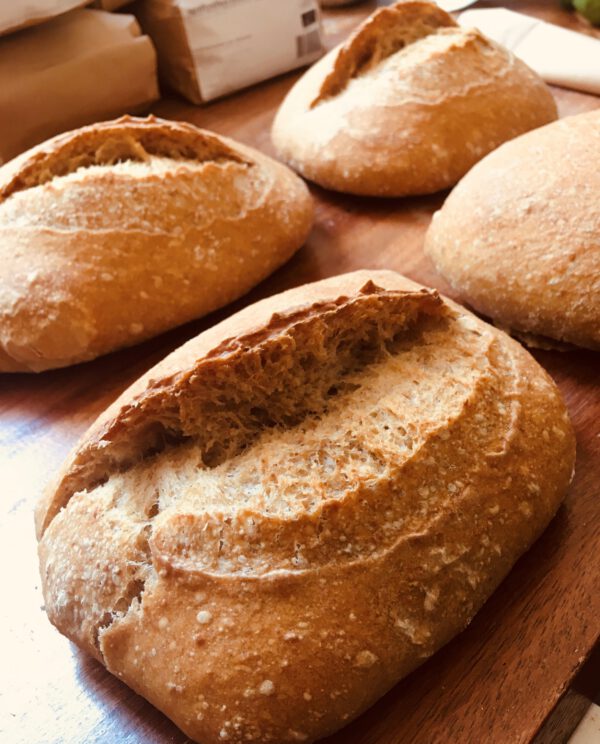